The 17 Best Breweries on Cape Cod

Drinking beer on Cape Cod is a national pastime on par with baseball. Plus, it's a lot cheaper than drinking at Fenway Park, and, for that matter, most Boston breweries. If we didn't know better, we'd say that the red solo cup was invented specifically for sneaking beers onto Nauset Beach.

There was a running joke when "born-on dates" were invented in the late 90's by Annheuser-Busch that the beer expiration date code's for cases of beer bought on the Cape were the same day. We say cases because this was before 30 racks, 18 packs, and whatever other random denominations beer comes in these days. 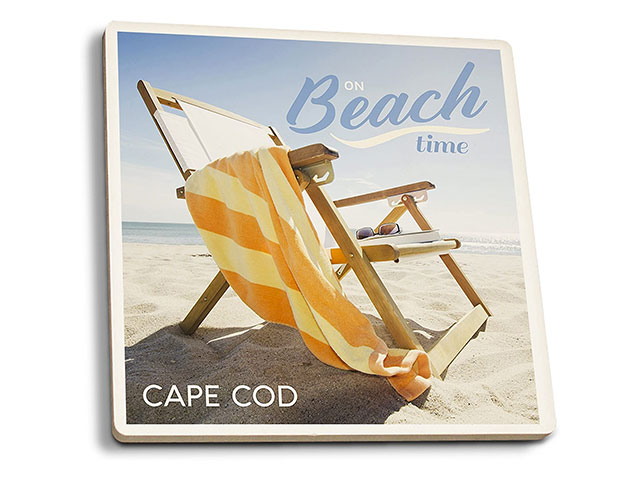 Always feel like you're at the beach with these classy beer mats.

Tourists and year-rounders alike can find fresh-brewed local beer at several bars and restaurants on the Cape. So even if you can't make it to the local breweries themselves, you can find small-batch Cape Cod beer at area restaurants on your next getaway - some even off-island.

For example, at Father's Kitchen and Taphouse in East Sandwich, Barnstable Brewing's Blueberry Ale and Jesuit Juice are served on tap, along with Cisco Brewers' Whale's Tale Pale Ale and the Speedway Boogie IPA from 6A Brewing just over the Sagamore bridge.

The 1620 Brewhouse in Provincetown features the Pollock RIP IPA on tap and the Handline Kolsch in cans from Devil's Purse in South Dennis. Both pair well with an order of the brewhouse's fish tacos or the lobster BLT with garlic mayo.

Cape Cod Beer, along with Willie's Superbrew partnered with Hy-Line Cruises, the ferry service that takes you to The Islands, to put on an evening of dining, drinking, and live music.

We miss boating, dining, drinking, and live music. The COVID-19 pandemic needs to end. It has closed down so many tasting rooms, much to the dismay of not only craft beer-loving tourists, but the owner's who would like to remain in business.

6A Brewing Company is conveniently located immediately upon crossing over Cape Cod Canal, on the Cranberry Highway in Sagamore. The Endless Night Mint Chocolate Stout is the kind of boozy, rich, flavorful, did-we-mention-boozy? stout that we can stand behind. 6A's variety doesn't start and end with different types of IPAs, they offer brown ales, white lagers, and witbiers, too.

Aquatic Brewing is currently trying to open up their taproom in Falmouth. In the meantime, folks in Falmouth should consult Bad Martha or Naukabout for their craft brew needs. Aquatic Brewing also has a really awesome brewery logo. 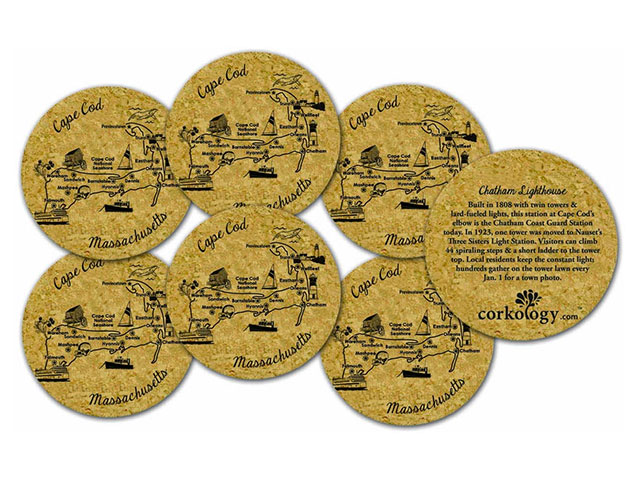 You don't want to ruin the wicker on your seaside patio, do you? Didn't think so.

A flight paddle of beers, lawn games, and live music sound really good right now. All three can be found, along with 4-packs to go and growlers, at Bad Martha Farmer's Brewery in East Falmouth. Open year-round, this brewery is a (strong) stone's throw into the Waquoit Bay National Estuarine Research Reserve. An in-house 15bbl system assures patrons both on-site and purchasing locally of fresh craft beer year-round.

Give the easy-going Seconsett Island Session Ale a try if you're going to spend a few hours around the Bad Martha taproom.

Speaking of beach beers, Barnstable Brewing's Cape Crusher sounds exactly that, a beer you crush on a beach. They even state that themselves on their website. Jesuit Juice is a call back to the family's Boston College and Creighton roots. Quite the rationale for the beer name. Saddle up to the bar, or, take your pour to the bag toss area for some friendly competition at this Main Street Hyannis taproom.

Naming your brewery Cape Cod Beer is a masterclass in branding. CCB offers brewery tours, live music in the Beer Garden on Saturday nights, and even plays host to the Cape Cod Farmers' Markets. Add in some exercise classes (Hoops & Hops), cocktail classes, and Monday Industry Nights, and their event schedule is jampacked. We haven't even discussed the beer.

As for food, they have local food trucks stop by, along with Pop Up Kitchen vendors - local restauranteurs. In fact, the Cape Cod brewery is so complete, it offers wine from First Crush Winery in Harwich, just a 20 minute ride down Route 6.

The place really has it all. You could even argue it has too much, as there is no way we are ever going to try Shucker's Reward Oyster Stout, an Irish Extra Stout brewed with something "extra" ... you guessed it, 20lbs of whole oysters. We will stick to the Cape Cod Red, thank you very much.

Shoal Hope has been operating out of a "hosted" taproom in the Cape Cod Beer Company location for almost three years now. They have a few different cider varieties to try out. For the gluten-free folks visiting Cape Cod Beer, this could be a good thing.

Devil's Purse Brewing Co. sells retail kegs of beer. And just like that, we're in love!

Their craft beers include the Handline Kölsch, Hen & Chickens Double IPA, Pollock RIP, South Dennis-Style Table beer, and, coming in around 11% abv, the Chart Monster Olde Ale (bottled, of course). The notes of cherry, leather, and tobacco better be worth the $35 bucks.

You can purchase "relics" of the brewery's history, including a framed portrait of Emperor Ming for $500. Or, you know, a $5 DVD of Bonnaroo in 2004 - the same Bonnaroo we had a ticket for only to have the ticket offerer leave preemptively.

We are very much interested in snagging ourselves a SIP-A-DEE-DO-DA NEIPA. That will be one wonderful day.

Hog Island Beer Co. is open seven days a week from noon to 8pm. They also have two patios and a lawn to sip beverages on. With rows of picnic tables, some even covered by a large tent, visitors should feel welcome to enjoy a few pints during a hot day on the Cape. We recommend you try the White Shark Wheat as well.

Naukabout Beer Company recently completed a project to offer outdoor beer garden for sit-down beer and food service. In addition to the six thousand square feet of patio, Naukabout will also be pairing with The Lobster Trap and Bay End Farm to offer Lobster Rolls and fresh, locally-sourced produce with their food. The cycle completes itself as Bay End uses NBC's spent grain as fertilizer.

Naukabout Beer Company has crafted a "Virtual" series of beers, including the Staycation IPA, the Salmon Pants Strawberry Milkshake IPA, and the 6 Feet Away DIPA - New England Double IPA, the latter of which comes in just a hair over 8% abv. Niiiiice.

Asphalt Glitter is how you name a beer. It's a Coffee Stout brewed by the good folks at Provincetown brewing that's sure to wake you up in the morning, especially if you had a few too many bevvies at the parade the day prior. Other beers to check out are the Double Rainbow IPA, The Bearded Mistress, and the Crandaddy Sour ... where do you think they got the cranberries from? Hmm ...

They also brew a season Oktoberfest beer which is always something to enjoy in the fall.

It's Sea Dog. It's a brewpub where you know what you're getting. Stop by, get a blueberry beer, and enjoy yourself.

Ahh, Tree House. One of the biggest names in craft beer opened up shop down on Cape Cod. Tree House is crafting an amazing plan to get themselves spread out across the state in population-dense (well, the Cape is in the summer) areas that help maximize exposure.

It wasn't a smooth opening though, as neighbors took some issue with occupancy, traffic and the like. However, it seems an agreement was made and things are hopefully "good" now.

Anyway, grab your world-class IPAs from Tree House and enjoy them wherever you park your car on the Cape. Beers like, Julius, Juice Machine or Very Green.

Off Cape Cod Breweries near the Bourne and Sagamore Bridges

Buzzards Bay enjoys a rich history of sourcing local ingredients to supply the grains and hops for their craft brews. If you're short on time and don't want to sip some beer in the taproom, you can take some cans to go, or, get a growler filled up.

Beyond their fun, bar game and arcade fueled taproom in Bourne, Buzzards Bay has a Westport farm/taproom where they throw big Warehouse parties with live music and food. 21+ at both locations as they are not kid friendly or dog welcome, just so you know.

As far as beers to try, check out the Hawsepiper Lager: Butler Flats Black™, a Schwarzbier with notes of coffee and chocolate. Otherwise, roll with a Horseneck IPA, Flounder, or eponymously named, Buzzards Bay IPA.

One of the interesting facts about Wareham's Stone Path Malt is that it is the first malt house in New England with its own taproom. For food options, you are on your own.

Breweries on The Islands

Cisco Brewers, where the party never stops. Nantucket's lone brewery is a Gronk-level fiesta, only subbing out the mesh shorts and tank top vibe for canary yellow polos and anchor-embroidered khaki shorts. A few Grey Lady's on the Cisco patio are just what the vacation doctor ordered. Also, the brewery tour is an enjoyable way to spend an hour in the afternoon.

As a bonus, they possess a winery and distillery on-site. Huzzah!

Offshore Ale Company is a perennial winner of "Best of the Vineyard" awards, such as Best Bar/Pub, Best Year-Round Restaurant, etc. Offshore is a brewpub that is a full-service restaurant that features wood-fired pizzas, burgers, and more.

Beyond dining and drinking in, Offshore Ale Co. offers 4pk cans and 64oz growlers to-go. They even have a few dog-friendly tables in their beer garden for Fido and the rest of the puppers out there.

Hopefully you make it out to some Cape Cod breweries this summer and sample all of their great craft beer. Hopefully we do, too.

If you are considering stopping at local breweries on your way onto or away from Cape Cod, there are plenty in Plymouth, along with a few strewn along routes 495/195, in towns like Buzzards Bay and Wareham. If you're looking for a solid brewpub that has 30+ beers on tap, check out Finn's Craft Beer Tap House in Hyannis, where you can order a Finn's Craft Beer Flight.

If Rt. 195 is your way home, stop at Moby Dick Brewing Company in New Bedford. The Whale's Tail flight paddles are top notch.