An awesome thing about Brix Brew & Tap is that you can actually get your own brew on tap there. We're sure there is a strong review process, but that's awesome. Plus, they have a beer called The Marky Mark Special. That's one hell of a beer name.

Patio drinking is fun, and Brix has one. Just remember that if you bring your puppers on down to Brix to join you, it is patio-only for ol' Fido.

Breweries near Brix Brewery and Taphouse in Greeley, CO

We should mention that ¡SPONCH! from Greeley's WeldWerks is an absolute delight.

Whether it's their Winter Gose (Berry Solstice), their Czech Dark Lager (Greeley Nights), or their Mosaic Blonde Ale with apricot and cherries (Hyper Child), Brix has a beer for you.

Buddy's Elixir sounds like a breakfast beer after a long night of sampling high abv beers. You know, something to get you back in the game.

Charcuterie boards, a Pretzel flight (dope), a hot pastrami sandwich. Brix has some decent eats. Or, you know, a bag of Boulder chips for $2. 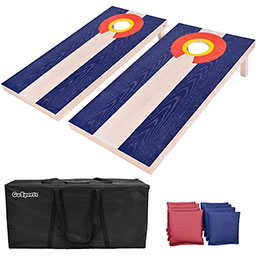 Show off your love of the Centennial State while torching your brother-in-law at bags.

That CO corn hole set is a sweet Colorado craft beer-related gift to give someone from The Centennial State.

You can book a private event at Brix Brew & Tap. Trivia Tuesdays. Live music on Fridays. An occasional corn hole tournament. There are even some beer brewing books in the taproom for patrons to enjoy.