How do you chug a beer quickly?

When summer is in full swing, many people are hitting the beach for some well deserved relaxation. As the sun sets, and the party begins, it is always a good time to enjoy a cold refreshing beer. But what if you want to chug your beer, not sip it?

The instructions on how to successfully chug a beer are not often spoken aloud, for it is a secret superhero power that no one should divulge. Nah, it's not even close.

But chugging is a life skill that everyone should know how to perform. So here is a guide on how to chug a beer as impolitely as possible.

Why impolitely? Simple, you're going to want to rub it in when you crush the drinking competition. Like the girl at the US Open.

Hint, this will come in useful when playing drinking games, such as waterfall. In fact, chugging is the original drinking game. No thumb rule. No never-have-i-ever. No questions. Just pure, raw drinking athleticism on display. First to finish wins. The rest are all losers.

As a reminder, always know your limit. 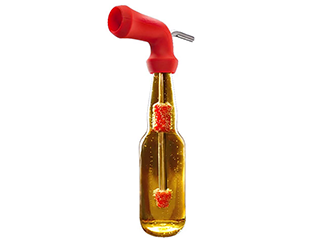 7 Things That Matters When Chugging Beer

This is important for a whole host of reasons. First, you're only chugging beer for a few different reasons. These reasons include to get drunk, to win a drinking contest, from a rule in a drinking game, or because you are a glutton for punishment.

In all likelihood you are drinking a beer meant for chugging. Miller High Life, PBR, and anything else from Milwaukee come to mind. So, it's safe to assume that you are not tipping back high abv Triple IPAs and Russian Imperial Stouts like Henniker Brewing's King Misanthrope, a 10% wall of chugging pain. Plus, who has the $$ for that kind of drinking? 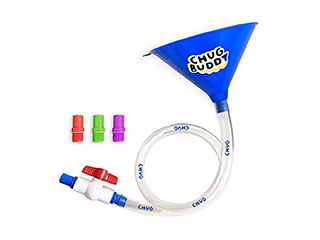 This beer bong would make an excellent addition to your next bachelor party. Or, use it for college drinking games. The choice is yours.

Beer selection also matters for taste. No one is saying that you can't chug a fruity sour ... well, yes, we are. You can't power down a Sparkleberry Jazzfruit Bomb Pop Kettle Sour like it's a Busch Light. Don't argue with us, you just can't.

Pick a beer that is fairly even keeled and easy for you to drink. If you're partying in college, you're doing just fine with keg beer. If you don't have easy access to PBRs and Bad Larrys (Bud Light), or, you gave up drinking them several years ago because you're a craft beer purist now, then select your favorite APA or blonde ale and give it a whirl.

Don't be that guy.

The less carbon dioxide in your belly, the better. More room to chug. More beer to drink.

Find a sweet spot (not a pun) that you can work with. If you know that power drinking games are in your future, or you're still at a stage in life where chugging is a "good time", then eat accordingly.

By our estimation, eat accordingly means don't fill yourself up too much, and don't eat nothing. Eating nothing before drinking is always a bad idea. Heck, grab a convenience store sandwich, a pack of Hostess donuts, whatever, just don't eat nothing. This is doubly true before chugging beer.

On the flip-side, no chugging after a full meal. Doing so will really put the boot in Boot and Rally. Also, no seafood. This rule applies to all drinking, save for date night and some white wine.

Want to know how to open wine without an opener?

Why How You Swallow Matters

TV shows & Netflix movies make it seem like everyone can just tilt back their head and pour countless beers down the hatch and that's just not the case. The way that beer flows during a true chug involves the beer hitting the back of your throat. This makes people squirrely.

What separates the real beer champs from the beer chugging chumps is that they have learned how to relax their gag reflex. The gag reflex is, "a contraction of the throat that happens when something touches the roof of your mouth, the back of your tongue or throat, or the area around your tonsils."

Ipso facto, vis-a-vis, concordantly, knowing how to properly swallow, or perhaps a lack there of, is key when it comes to learning how to chug beer.

In fairness, we can't do this. We aren't world class masters of the chugalug.

Pro-Grade marketing campaigns would have you believe that drinking beer as cold as the water flowing down the Rocky Mountains is what you want. It's not. A case of ice cold beer sounds awesome, especially on a hot summer's day or after you've mopped the rooftop of Shawshank prison, but it's not really great for drinking, and, even worse for chugging.

Ice cold beer is straight up obnoxious when it comes to gulping beers given the way your throat muscles react to the freezing temp, to say nothing about getting brain freeze. And, we aren't even going to cover the mulled (piping hot?) beers that the North American Brewers Association says existed in 1500-1800s, long before modern refrigeration.

So let's all agree that room temperature suds are most ideal to the average chugger. You outliers can go chug yourself.

Why the Beer Container Type Matters

The flow of air is a major component to guzzling a beer. Just watch the movie Beer Fest to learn all about twisting the boot!

Different vessel types handle the flow of air and liquid differently. Or maybe they don't. We aren't scientists, how should we know!?

Setting science aside like our last Presidency, different containers have different mouths. It's harder to spill beer drinking from a bottle than it is a large beer stein. But, it's much faster to swill down large amounts of booze from a red solo cup than it is a beer can.

Unless you shotgun the beer. Which adds air rapidly to the liquid. And hello again, Science.

How to Chug a Beer in 5 Ways

Let's discuss how to partake in beer drinking excessively. Once again, always know your limit.

To straw or not to straw, that is the question.

Tilting is very important. Perhaps more so with a can than a cup. It might be the most common way you'll end up chugging.

But pounding down beers from a solo cup is a time-honored college tradition, so if you're going to do it, you might as well be good at it. Here's a tutorial. 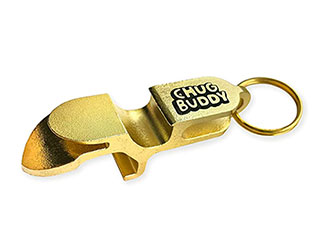 Like any good drinking tool, Chug Buddy's can opener can attach to your keychain. Convenient, because you never know when you want to shotgun a beer.

Shotgunning Beer from a Can

The grip it and rip it approach. Here's how it goes.

Open your mouth, cause there ain't not stopping gravity.

It's good to know the history of chug. The word chug derives itself from the word chugalug, which means, "to drink a container of liquid (such as beer) without pause", according to Merriam & Webster - and who can't trust the dictionary?

Here are some word cousins to chug. Words that also lend themselves to a sense of drinking beer greedily.

Good luck with your race to the bottom of the glass. May you finish first and be crowned champ!