Ayota Illustration is a husband and wife team based out of Texas that specializes in custom illustration for the advertising and merchandising industries.

Some background on Ayota Illustration

What impressed us were the custom craft beer labels that Ayota Illustration were commissioned to design for various microbreweries and taprooms around the country. The growing list includes The Half Wall Brewery, Dystopian State Brewing, Hoppy Trout Brewing, LoveCraft Brewing Company, and Dratz Brewing Company.

We dug their style, especially the puppers on Level Pebble's Good Will, so we decided to catch up with them to learn more about who they are and what they have been working on lately.

FMaB: So Rob, tell us about yourself and Ayota Illustration. Who are you? What do you do? How did you get into illustration in general, and of course, beer labels/branding?

Rob: My name is Rob Ayotte, I'm an illustrator from Minneapolis currently living in Texas. I've been drawing my whole life, it's the thing I enjoy the most. After I graduated from MCAD, I had mild success doing some freelance Jobs for a number of years.

I also worked in the public school system as a mean to sustain myself in the hope to make art my main source of income. To realize that goal, ultimately it took meeting my wife, who among other things is very adept at dealing with the business end of being a professional artist. I had heard of doing beer label design from a friend from college and then one day while visiting a local liquor store I realized that I could make labels at least as good or even better than the ones I saw on that store.

FMaB: What is your favorite beer label that you've been commissioned to design?

Rob: Often my favorite beer label is the one I most recently completed. Currently it's one called Run to the Pils, an Iron Maiden inspired beer brewed by Wildrose Brewing.

FMaB: Do you take part in the beer naming process?

Rob: No, they all give me the names. I have a lot to do with the subject matter in what is depicted. Some have an idea of what they want, other times I come up with an idea based on the name and/or the ingredients in the beer.

FMaB: Do breweries hire you for your style, or, do you take full direction from them? Or is it somewhere in between?

Rob: Breweries hire me based on artwork that I've done previously for other breweries. If they can imagine me doing something that they would like they contact me and I come up with a rough sketch for them.

At this point they have an opportunity to make any comments before I continue on with the final phase of coloring, painting and applying text and other information to the label. 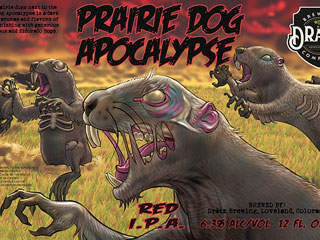 FMaB: Ok, we'd like to ask a few questions to get to know you a bit better. What's your favorite craft beer? Why?

Rob: Theze Nutz from Wildrose Brewing. I rarely get to sample the beers I do labels for because the breweries are usually in other states.

FMaB: What piece of your artwork are you most proud of, beer-related or not? Our favorite piece is your black & white Ninja Turtle (Leo). It recaptures a lot of the grit that Eastman & Laird started with.

Rob: It was a piece of artwork commissioned by Mad Duck Posters and licensed by Mattel called Masters of the Universe Ancients. This was the most challenging piece of artwork I've ever done. That piece, at the time is more ambitious than any other work I've done before then.

FMaB: What genre of music is tops on your list? What plays on the office speakers?

Rob: My favorite musician is Bob Marley. He had a huge impact on me when I first started listening to him and has never faded. His music and the character of the man himself are a continual source of inspiration, comfort and courage for me. 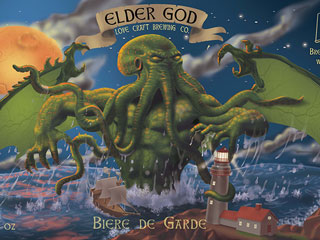 FMaB: If people want to see more of your work or contact you, how should they go about doing that?

Rob: You can send me an email at ayotaillustration@gmail.com or check my Instagram. If you want, you can buy our artwork through our Threadless store.

FMaB: Rob, it was an absolute pleasure getting to know more about you and the good illustration work that Ayota is doing both broadly and in the craft beer industry.