The Best Non-Alcoholic Beers Your Money Can Buy

These craft beer brands (and mass market as well) are definitely not your uncle's non-alcoholic brew choices.

Sure, O'Doul's and other alcohol-free beer options did exist back in the day, but the selection, and more importantly, quality, couldn't quite match what is available in the low-alcohol market today.

If you could look in the back of beer distributor trucks and vans today, you'd see a bevy of hoppy pale ales and wheat beers with the same taste and mouthfeel as their boozy counterparts. The time wasn't too far back when your grandfather had one non-alcoholic drink option: water. As for your father, there was NA beer, but it was a pilsner and pilsner only. Do you really think they could purchase a non-alcoholic raspberry gose, like the one Bravus Brewing brews? 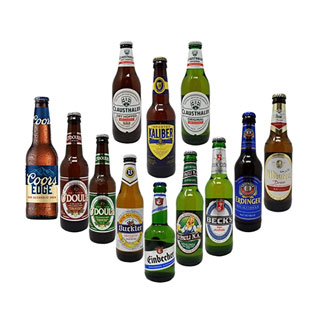 At your disposal is an array of hazy IPAs and weissbiers from your favorite microbreweries and taprooms across the United States. What's more, there are even non-alcoholic seltzers. Ok, scratch that, those have always existed - their wellness is noted.

Anyway, here are a few of our favorites.

On Your Mark | KitNA Brewing

KitNA Brewing is a new non-alcoholic brewery in Portland, Maine. They're just about ready to start shipping to you too. We're very impressed with the product and excited to see how they do. Plus, you have to respect anything brewed out of a city named Portland (either coast).

A true NA beer, Hairless Dog's non-alcoholic IPA is 0.0% abv. Straight up zero booze. We don't know what magic they work in the fermentation process, but it's legit.

Run Wild IPA is brewed by Connecticut-based Athletic Brewing Company. We don't want to be too on-the-nose with this, but Run Wild is the perfect beverage for the non-drinker to conduct a Beer Mile with.

Upside Dawn is quite possibly our favorite non-alcoholic beer of all-time. It's crisp, light, refreshing, and it does not sacrifice any flavor or satisfaction in its consumption.

Bravus, a California craft brewery features a whole lineup of interesting NA beers that even the most discerning of non-alcoholic consumers can't find fault with.

This beer has Idaho written all over it. Well, if Idaho moved to San Diego for a bit to catch a few waves before moving back home to settle down.

Unlike FMAB fave, Puppers Beer, this dog-inspired brew has a lineup of NA Beers that come in 4 packs of cans, just like your favorite brewery serves up. They offer monthly subscriptions alongside craft variety mixed packs sized by 12 and 24 cans each.

The Boston Lager it is not. A good NA beer it is. Forget the Sam Summers, Cold Snaps, and Porch Rockers for a moment and imagine a world in which you can stay for beers three, four and five after a beer league softball game. That's Just the Haze, a non-alcoholic version of a hazy IPA.

Does Brooklyn Brewery produce anything that isn't really great? Their NA Hoppy Amber is enjoyable and will allow you to keep your craft beer cred whilst imbibing it.

Brooklyn's non-alcoholic Special Effects consists of their Hoppy Amber and an IPA. Both are year round offerings that feature a wealth of aromatics and hop notes. Speaking of malty notes, you will note when you drink the Hoppy Amber the Munich and Caramel malts that sit alongside the Amarillo, Citra and Mosaic hops. And for the calorie conscious, Brooklyn is trying to keep their NA beers to 100 or less calories.

Craft Pils, a non-alcoholic malt beverage from Notch Brewing was just released to the public as their first NA beer in a NA beer pilot program they are creating. We're excited to get our hands on it as soon as we can.

A non-alcoholic offering from Weihenstephaner, the oldest brewery in the world. We very much enjoyed Weihenstephaner's take on a NA beer, as their Non-Alcoholic Hefe could have fooled us with it's near 1:1 taste ratio. Here is the description from the brewery itself:

"Our golden-yellow non-alcoholic malt beverage tastes like a premium malt beverage has to taste: tangy, fresh and full-bodied, with hints of cloves and honey as well as a fine yeasty spirit. The unique taste is achieved by a method developed in collaboration with the Technical University of Munich. Weihenstephan: the top fermentation is not interrupted and the beverage has the entire time to mature. Only after the full development the alcohol is withdrawn gently. A good companion to light summer dishes, sweet and sour dishes or fruit sorbets."

Sounds like the German-based brewer wants you to enjoy a bottle of this with your lobster dinner.

Anyway, 58 calories, 10.8g of carbs and 2.5g of protein round out the nutrition profile on Weihenstephaner's NA beer.

Clever. We see what you did there, Lagunitas. With a 28 rating on the IBU scale, Lagunitas NA version of an IPA is highly drinkable and, obviously, infinitely sessionable.

Here's a quote from the brewery to descripe IPNA, "Massively dry-hopped and delicious ... like a clean, zesty bunch of hops smackin’ you in the face! Yes, in a good way."

Don't forget to catch the grapefruit.

Though we tend to focus on craft beer around here, that doesn't mean we completely neglect the mass market beverage, including the non-alcoholic brew makers and carbonation creators. We do this to acknowledge that thousands of really great and talented people work at breweries all around the world. Those people deserve credit for their work as well. So, here are some Mass Market NA Beer Brands to check out.

Another completely alcohol-free beer, Heineken 0.0 works best for the NA beer lover who takes a lager-first approach. Though maybe not as pungent, the Heineken 0.0 is unmistakably on-brand.

Not sure Bud Zero was what Adolphus Busch had in mind when he kick-started Budwesier and brewed his first lager back in the 19th century. Who here is willing to bet the farm on the idea that both he and his wife, "Lilly" Eberhard Anheuser, would approve of this NA beer? What's next, Bud Light Zero? Perhaps Zero-Carb Bud Light?!

Also, we weren't kidding about Zero-Carb Bud Light. It's really real. 2022. It's called Bud Light Next.

Malta is a Caribbean staple. This malt beverage, brewed with hops and barley, is a summertime soft drink treat. It does contain some beer-like aromatics, but it's not a beer. It's popular in many island countries, including Puerto Rico, Aruba and the Dominican Republic. People even enjoy it in South America, Africa, and parts of Europe, countries such as Denmark.