We're fairly certain that it's ok to consume Green Beer if it's March 17th and you're skipping out on work. Tell your boss to call us if they have a problem.

What is Green Beer?

In the old brewing days, green beer was considered a lager that was too "young" or under-fermented. It was beer that had yet to reach its maturity, yet to be conditioned. In modern times, it is a beer that has been colored green via food dye, either with drops of green food coloring, or, with a natural food dye like Wheat Grass juice.

The idea for green beer, however, stems from a Bronx visit to the Schnerer Club by a New York based doctor named Thomas Curtin. The good doctor used a bunch of materials on hand to produce a steady stream of green suds flowing all day long. Word got out, popularity ensued, and St. Patrick's Day was never the same. It would be a feel good story if harsh chemicals (wash blue) weren't used by Prof. Curtin or if billions of hours of lost productivity didn't follow on March 18, right? 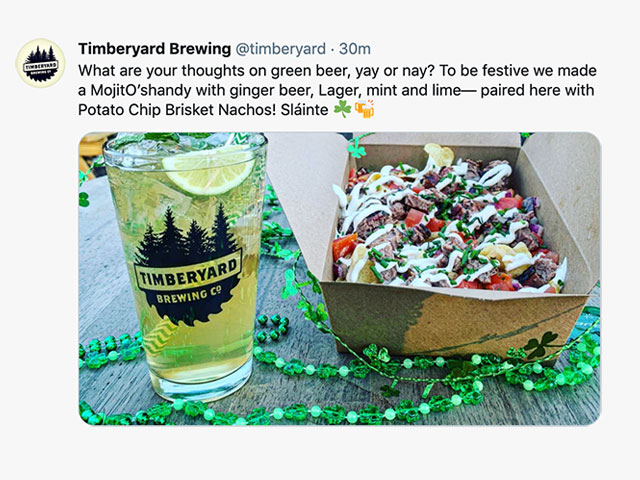 Can you drink green beer? Can it make you sick?

Green beer, the modern day concoction? Yes, you can drink it. If you've ever had a beer and/or had a store-bought birthday cake in your life (food coloring), you should be fine. If you're a bit more conscious of what you put in your body, you can opt for the Spirulina or Matcha versions of green beer. We suppose you could even try grinding up some hops in a Vitamix and using them to make beer green.

Do you drink green beer on St. Patrick's Day?

You too can be Irish on St. Paddy's Day simply by ordering up a Guinness with a tap-carved shamrock, or, by setting aside your favorite IPA for the day and grabbing a pint glass, or beer stein if you have one, full of green beer. Jokes aside, if you're going to drink green beer, the day dedicated to Saint Patrick is probably the one.

Just don't chug the beer, lest you have to leave the bar before Drowning the Shamrock.

How to draw the Guinness Shamrock

Can you buy green beer?

Swing by any bar in Boston, Chicago or New York City on St. Paddy's and someone will be drinking a pint or three. So yes, you can buy plenty of green beer out at bars across the United States on March 17th of any year. Well, any year other than 2020.

If you're looking for green craft beer, Platform Beer Company out of Cleveland, Ohio taps a milkshake IPA called the Shamrock Shakedown that checks in at 6.3% abv. Captain Lawrence Brewing out of New York brewed a beer called "Gimmicky Green Ale" that uses Spirulina instead of food coloring to derive its green hue.

In general, craft beer purists tend not to chase the Leprechaun when brewing their own beers, so you won't find many commercially available green beers.

How to make green beer

Listen, if Chicago can turn half of a river green for their rolling St. Patrick's Day Party (you remember the scene in The Fugitive, right?), then you can certainly fill up a pint glass with two simple ingredients: beer and a food dye. For starters, take your favorite mass-produced pilsner, or any light beer for that matter, and add green food coloring to it.

Lighter pale ales and American blonde ales also make good substitutes for big-beverage lagers, especially if you only drink craft beer. As for darker beers, you will just need to play around with the levels of food coloring to get the desired look. 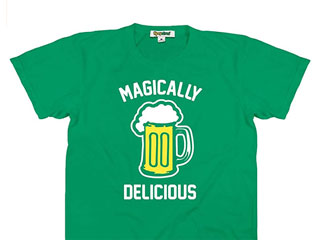 Skip the "Kiss Me, I'm Irish" shirts and roll with one of these next St. Patrick's Day

There are some who believe that blue food coloring does a better job establishing the perfect green color, so while you're at the store, maybe get both and experiment. However, be careful with what you wish for with blue food coloring. According to the Smithsonian, "wash blue" used to be used to make green beer.

There are also some who would prefer to use a natural food dye like Spirulina, Matcha, or Wheat Grass juice. Those options are all great. Just note that they alter the flavor of the beer a lot more than artificial food coloring. Then again, if you're drinking a Schlitz, what's the difference!?

What do you eat with green beer?

Corned beef with colcannon. Warm Irish soda bread. And, any green-colored appetizers that Becky is serving at her St. Patrick's Day Party.

If you are intent on throwing a St. Patrick's Day Party, know that not all appetizers need to be green, though points do get assigned for festiveness. If it's traditionally Irish, great. If it has a potato base, know that you're signing up for plenty of carbohydrates.

If what you mean by green beer is beer that has been produced by breweries who are trying to reduce their environmental impact, then that's a whole other thing indeed. Brewers like New York's Brooklyn Brewery have been working for years to reduce their carbon footprint, finding ways to reuse or recycle materials like employing used brewing barrels as reclaimed wood for furniture in their taproom, converting the facility to all LED lighting sources, or using plant-based disposable cups. You could say that their beers are "greener" than those of many other microbreweries and brewpubs.

If that is your intent, then we encourage you to seek out the greenest beers being produced and support those breweries. Then again, have a conversation with someone who works at a local brewery and ask them about their own sustainable practice. You may find that they share Brooklyn's philosophy and work with local farms to offload spent grains or grow their own hops on site, like Canterbury Aleworks in New Hampshire.

We know, there's even a Green Beer Day. GBD is officially the last Thursday before Spring Break starts and is celebrated by a college named after another city, Miami University of Ohio. An unsanctioned, day-long all campus rager, nay, all-city rager, students start drinking in the wee hours of the mornin', essentially pre-gaming for the Oxford bars that open at 5am.

If ever there were a time for kegs & eggs, Green Beer Day is it.

Don't be scared off by a little food coloring (unless you're allergic). Get out there are quaff down a few pints on St. Patty's Day and responsibly have a good time drinking green beer. We won't tell your boss where you are.

Photo by Patrick Fore on Unsplash