If you're looking for more of a beer hall than a taproom, then Jack's Abby is the place for you. Jack's Abby is the complete craft beer experience in that it serves tasty beer with delicious food pairings, before letting you part ways with more of your hard earned money by selling 4-packs, t-shirts, and even beer soap.

The brewery is located on Clinton Street in Downtown Framingham, MA. In fact, there are two breweries on Clinton St., Jack's, and it's spinoff, Springdale (Barrel Room). Framingham is less than a half hour ride from Boston, so if you need to get out of the city, head West.

Between Jack's, Springdale, and Exhibit A Brewing, Framingham, and Metrowest in general, have at their disposal quite the arsenal of lagers, ales, and experimental craft beers. And that doesn't even include John Harvard's brewpub or the Framingham Beerworks.

They attend the annual Cape Cod Brew Fest at the Cape Cod Fairgrounds.

TJack, Eric, and Sam Hendler opened Jack's Abby in 2011. Their original location at 81 Morton Street is now the site of Exhibit A Brewing. All three breweries, Jack's, Springdale, and Exhibit A are taking advantage of underutilized warehouses and industrial buildings downtown, near the Framingham train station. With the move from Morton Street to Clinton Street, Jack's increased their physical space ~13x, allowing them to produce over 100k barrels per year. What an amazing amount of beer for a still-growing independent brewer. One challenge of scaling the business is accounting for the storage of barrels, cans, and grains. The sheer size and scope of the Jack's Abby brewery dwarfs that of locals Start Line, Cold Harbor, Lookout Farm, and Exhibit A.

Yes. I haven't taken one yet. I can't image a tour of Jack's would come with the same intimacy found in the tour offered by Squam Brewing, the one man nanobrewery near Squam Lake in NH. But, you never know.

Is the Beer Hall kid friendly?

Yes. Jack's is almost more of a restaurant in it's overall feel than taproom or bar. Springdale next door had some permitting issues disallowing children in the summer of 2017, but that got resolved. I would imagine the 6pm 21+ cut-off for Springdale applies to Jack's as well.

Jack's Abby Craft Lagers - what beer types do they brew?

German-style lagers. How many lagers? All the lagers.

Jack's is focused on straddling the line between German tradition with American innovation with regard to brewing. One great thing about Jack's is that there is so much diversity in the beer they not only brew, but what they offer at the taproom. This includes helles, IPL, maibocks, radlers, pale lagers, and even barley wine, like the Cousin Maker.

If you are looking for an IPA or a Belgian wit, best to head next door to Springdale, which we consider one of the best breweries in the Northeast.

The core Jack's lineup consists of an amber, black lager, india pale lager, pilsner, and radler. And of course, their House Lager. The golden House Lager bier keeps its hop character balanced. Their Post Shift pilsner enjoys a fresh complement of crisp Bavarian hops to make it infinitely drinkable. Crafted with American hops and displaying a hop aroma of citrus fruit is their Hoponius Union.

Are they not brewing the Ratskeller and Fire in the Ham anymore? Perhaps they are in Jack's Beer Graveyard.

Things get interesting where the specialty beers are concerned. They brew 5 different Excess IPL single dry-hopped versions with amarillo, denali, enigma, strata, and waimea hops. They have the Hoponius on Holiday (Tropical IPL), Mass Rising (Double Hoppy Lager), and Good Night Granny (Baltic Porter), and they get topically Massachusetts with the Cranberry Berliner, a sour wheat lager.

Jack's Bourbon Barrel-Aged Baltic Porter is the fireside winter beer you've been searching for. Perfect for a New England ski weekend away, this porter hits you brown sugar sweetness which, according to Jack's Abby, "gets balanced by roasted malt and hop bitterness." With a double digit ABV, you'll get hit with more than just brown sugar. 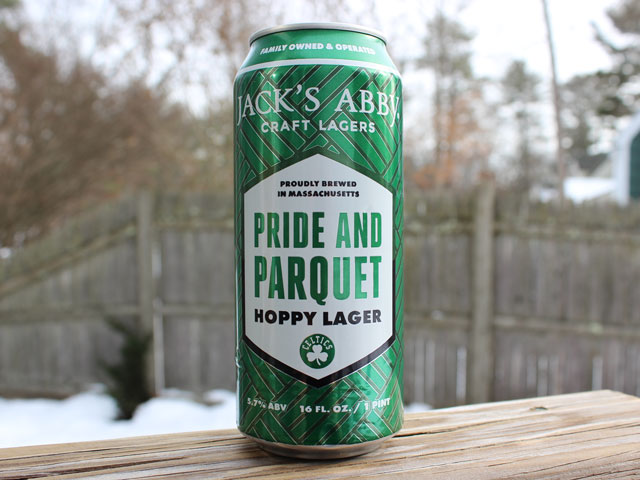 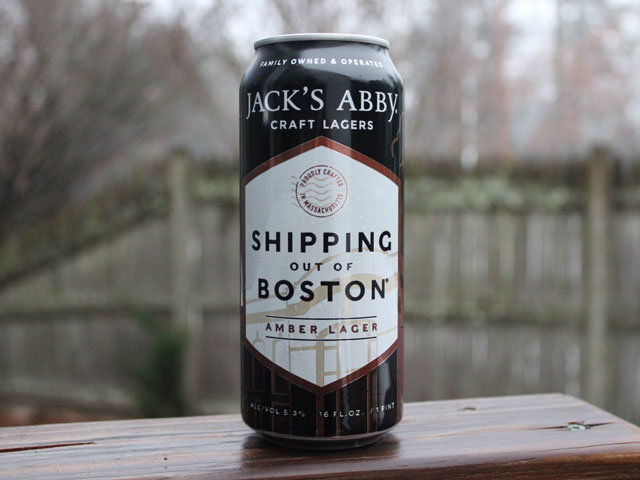 Shipping out of BostonJack's Abby 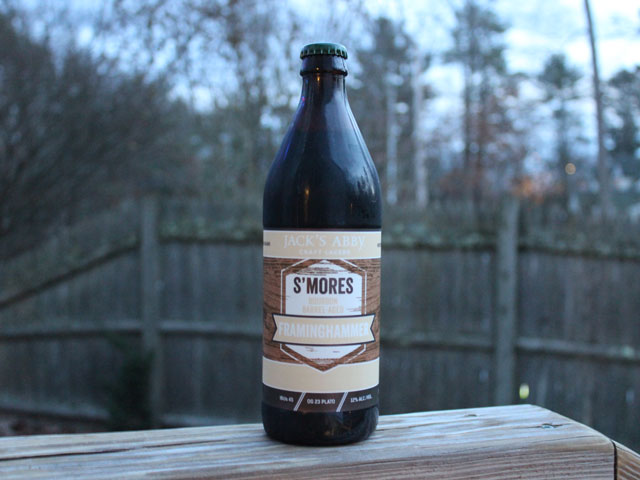 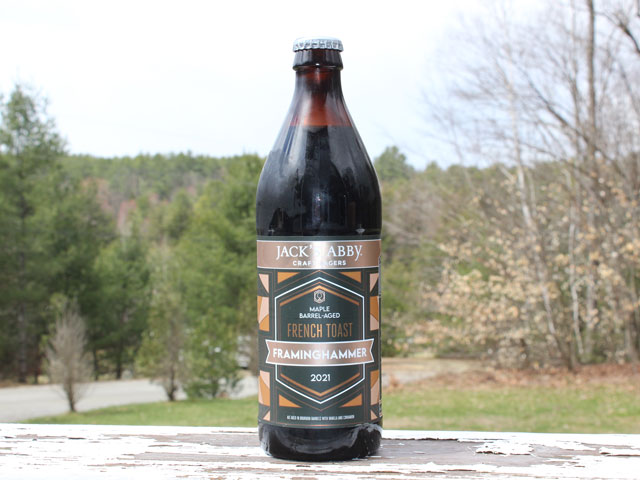 Fridges full of 16oz 4 packs adorns Jack's merch area. With somewhere between 18 to 24 beers on tap, one would think they'd be stupid not to offer flights.

Good question. Not sure that they do.

Not that I noticed.

Quite the fair share of merch can be purchased at the counter as you enter the taproom. T-shirts and other swag adorn the left-side wall of the Framingham Beer Hall.

Jack's Abby sells Red Castle Beer Soap on behalf of a former employee. The soap is great. Beer Soap is sweet if you want to lather up in the refreshing suds of saponified cerveza!

While Jack's has entrees, shareable plates, pizzas, desert, and specials, it isn't quite the full menu that you'd find at a restaurant, but it's close enough.

What Jack's does well is pork. The carnitas pizza and the braised pork shank were excellent. I imagine the other gourmet pizzas are just as delicious.

That said, I'm here to tell you that the braised pork shank was worth every dollar and more.

They have hosted trivia nights in the past. However, they don't have a live music license.

Can I buy Jack's Abby beers in stores?

Yes. You would be hard pressed to not find any Jack's Abby beer being sold at a store within 50 miles of Framingham. In fact, there are 50+ places within Framingham and the bordering towns, Natick, Ashland, Southborough, Wayland, and Sherborn alone.

If you're curious, give the Jack's Abby Beer Finder a shot. And as they say, there is fresh beer at 100 Clinton Street for sure.

If you live in the Metrowest area, you've definitely probably visited Jack's at some point over the past 6-7 years. Even if you don't, the craft beer connoisseur in you has probably worked up the motivation to make the trip out to Jack's Abby at some point.

Jack's is a working person's brewery. It doesn't come with the mythic quality of Treehouse, it just works hard to earn your respect through great beer, good food, and a fantastic taproom ambiance.

They are serving takeout food and beer to go due to Covid-19.

What kind of beer is Jack's Abby?

How did Jack's Abby get its name?

The brewery is named after Jack Hendler's wife, Abby.

Jack, Eric and Sam Hendler own Jack's Abby. They created the brewery in 2011.