Cenosillicaphobia is the fear of having an empty beer glass. Many beer lovers know this feeling.

The fear of an empty glass is a feeling we've experienced before. Heck, we haven't even had a Puppers Beer and we feel Cenosillicaphobic for an empty glass of that premium lager.

But say you spot a new craft beer at the packie, like Triple Ecstasy, a Triple IPA from Widowmaker Brewing's out of Braintree, MA. They are hip to the times, so they allow single craft beer purchases, thus allowing you to sample different beer styles. So, you grab the beer, checkout, head home, and crack it open.

It pours beautifully. And, the taste is remarkable. Smooth, but not thin-bodied. Boozy, without being overpowered. In short, it drinks quickly. However, now you find yourself on ounce 14-15 from that 16oz can pour. That's when the Cenosillicaphobia sets in. The pint glass just looks so lonely without that golden nectar coating it's durable glass walls. The Citra, Galaxy, and Vic Secret hops hardly got to know their victual vessel.

Can one be Cenosillicaphobic for green beer? Like being born on Leap Year and your birthday only coming around once ever four years, does the fear of an empty pint glass of green beer hit 365x harder because St. Patrick's Day is only once per year?

Is there a cure?

How do you pronounce Cenosillicaphobia? 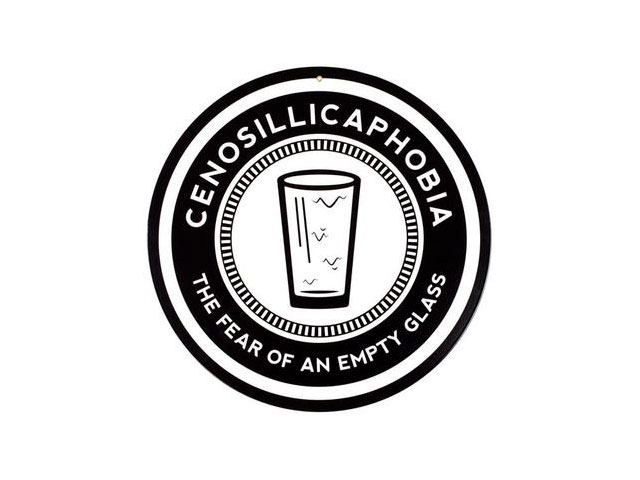 Perfect for your basement bar, man cave, or shedquarters. She sheds are equally worthy.

Here in the United States, we have the lovely e-Commerce giant, Amazon. Amazon sells an easy hanging, pre-drilled bar sign dedicated to the phenomenon. As far as cool bar signs go, this one is a winner. Perfect for your man cave, your basement wet bar, the makeshift pool hall that is your garage, or the shedquarters/she shed you call a drinking space. A photo of you drinking a cold craft beer in front of a "fear of an empty glass metal bar sign" will get your IG account trending on the interwebz. Or, it could just be a Guinness. Your choice.

The original Kegworks design, visible due to sublimation and the powder-coating process, would look great above your mantle. Plus, its American Steel fabrication makes it built to last. The customer reviews are positive, and, who doesn't love beer products that are made in the USA?

When it comes to craft beer gifts, this is up there for randomness.

A quick Wikipedia or Google search will turn up plenty of t-shirts dedicated to the phobia. It will also turn up a ridiculous urban dictionary reference to wrestler John Cena. Sharing is caring, so adorning Cenosillicaphobia t-shirt will let other Cenosillicaphobists know that they can confide in you.