The Best Homebrewing Books on the Market

Our list of homebrewing books wouldn't be complete without the great Charlie Papazian. Other names of note include Daniels, Lewis and Palmer.

The Complete Joy of Homebrewing by Charlie Papazian

The Homebrewer’s Companion by Charlie Papazian

Home Brewing: A Complete Guide On How To Brew Beer by James Houston

How to Brew by John J. Palmer

Malt: A Practical Guide from Field to Brewhouse (Brewing Elements) by John Mallett

How To Brew: Everything You Need To Know To Brew Beer Right The First Time by John Palmer

Homebrewing For Dummies by Marty Nachel

Homebrew Beyond the Basics: All-Grain Brewing and Other Next Steps by Mike Karnowski

For the Love of Hops: The Practical Guide To Aroma by Stan Hieronymus

How NOT To Start A Damn Brewery: Ten Business Lessons From The Front Lines of The Craft Beer Industry by Kelly KfM Meyer

This book was an enjoyable read. These ten lessons that Kelly shares, and boy does he share them, feel as though they should be obvious to any prospective brewery owner. Read this book if you're thinking about opening up your own taproom. But be warned, the KFM in Kelly KFM Meyer stands for, "Going to tell you what he thinks in colorful language."

If you're a brewer, you're probably used to it though. 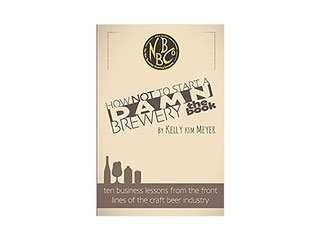