The Best Breweries, Brewpubs, and Tasting Rooms in Lake Tahoe.

A ton of really great breweries have opened in and around Lake Tahoe, as it is an awesome place to start a brewery. This can be attributed to not only the culture of the region, including the heavy tourism, but also the amazing water supply and aquifers. Below is our guide to finding the very best craft beer around the (cold) lake. Just make sure you don't Triple Lindy into the lake after you've gassed up, ok?

Some of these breweries attend the Placerville Bell Tower Brewfest and Motherlode Beer & Music Festival held in Placerville, CA. 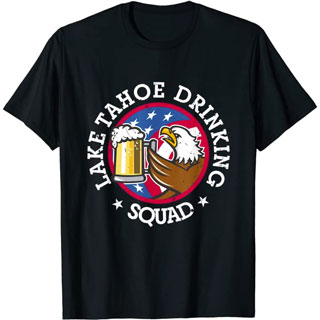 Squad Goals. Beer is plentiful in the land of the free and home of the brave. Drink on, Eagle. Drink on.

Wax-stoppered bottles, barrel-aged beers, and a commitment to excellent. It's appropriate that Fifty Fifty Brewing starts our guide to Tahoe Craft Breweries. They brew a trio of core beers, seasonal brews, and their Eclipse line of beers.

5050 states that brewing Eclipse is, "... an annual tradition at 5050 Brewing and it takes our team almost the full year to create each vintage. We start with Totality, our award winning Imperial Stout. We then age it in a variety of whiskey barrels that we source from some of the best distilleries in the world. After the beer ages (anywhere from 3 to 12 months) we blend, bottle and wax the tops to make sure it stays fresh. Unlike our other beers, Eclipse is an aged beauty so time in bottle can help. Drink it now, or save it as part of a collection to enjoy later."

Tahoe Mountain Brewing Company is located in the historic Kruger White House. TMBC is open for outdoor dining only at the moment, though curb-size pick up of to-go orders is an available option. If you're going to run a brewery out of a historic building, this is the one. The property is gorgeous, from the interior design to the outdoor setup.

Tahoe Mountain Brewing plans to run the full-service set up, both vertically and horizontally. They will be open for breakfast, lunch, and dinner, and, they plan to serve cider and wine to complement their craft beer. Not many craft breweries are in the breakfast game. We think more should be. We love breakfast beers.

Alibi's original taproom and production facility is the place to find exclusive beers and build-your-own beer flights. They don't have a kitchen on-site, but you are welcome to bring your own food in. Alibi Ale Works offers private tours of the brewery as well as offering private rentals of the facility. The ambiance, along with the craft beer, is top notch. Any of the Alibi locations are a must visit during your Tahoe visit.

The 1bbl operation is often put to use to conduct homebrewing classes. Seems like a smart move. The rotating 22 draft lines are supplied from the production brewery, all of which are available for your enjoyment in the excellent outdoor beer garden. The downtown Truckee Public House has been in operation for nearly 4 years. It is Truckee's largest outdoor beer garden, and, it's heated, so it can remain open to serve you during the pandemic. If you don't want to dine on-site, you can pick up some takeout and some Alibi pale ales to go.

The Incline Public House has plenty of entertainment options, including Trivia and Bingo nights to go along with live music. If you're planning on throwing your good buddy a super soft birthday party, then Bingo, and subsequently Alibi, should be part of the plan.

The Incline Public House rocks a sweet outdoor space and upscale food make visiting the IPH a must. They also serve cider, wine, and other non-alcoholic options.

A Kings Beach Nanobrewery, Bear Belly Brewing asserts that everyone takes a ride on the Struggle Bus once in awhile. We concur. Bear Belly is a super cool little taproom with a huge connect four and a foosball table. The kettles are exposed and so close to the action that you are practically sitting on top of them when you pull up a stool. If you stop in, try out a Golden Avenue Ale, a blonde ale brewed with pilsner and two-row malts, moteuka and cascade hops, and California Ale yeast.

In a (supposed) nod to Kelis, Bear Belly's Boys to the Yard is a Milkshake IPA that hopefully brings folks to the taproom. "You Name It" is also on the list of future bears. Uhh, we're happy to name any bear (beer) you want us to name, Bear Belly. You let us know!

Open every day of the week but Monday, The Good Wolf Brewing Company is a small Truckee brewery focused on hand-crafted ales and what they're calling Forest Beers. Their beer names are choice, including Gates of Delirium, Cyclops Monocle, and Shadowfax. Crazy as it may seem, we're really interested in the Tropticon, a Pineapple Coconut Berliner Weisse. You can book the Good Wolf Brewing tasting room for a private event by signaling your intent to the Good Wolf.

A Pico Brewery that has 2-3 in-house beers on tap to accompany gourmet grilled cheese sandwiches. For real, craft beer and craft grilled cheese. Do you need anything else in life? 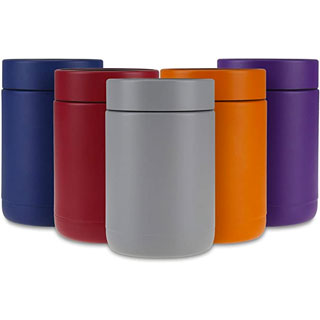 Gotta keep your beer cold at the slopside cabin or on the brew tour bus.

South Lake Brewing hosts trivia nights, ships out Bear Boxes, their monthly beer subscription, and started their own private beer community, the Bär Society. In short, they're hustling, and they have been since they opened in the Spring of 2017. Speaking of hustling, they have board games, shuffleboard, corn hole, and ping pong, so get on it, hustle your buddy for the next round. SLBC is open every day of the week from Noon to 6pm, hosting food trucks on the weekends. Their outdoor spaces include a beer garden and patio, to go along with their indoor tasting room. Stop by for a cold beer with your puppers or bring your kids, both are welcome.

South Lake pours up to 15 beers on tap in , sells 4 packs of cans to go, fills crowlers and growlers, and, sells kegs to the public in the Lake Tahoe area. As for their microbrews, we're impressed by the Fog Nozzle, a New England IPA, and the Sendtaur, an Imperial Stout with Raspberry & Vanilla (Sendtaur). Yes please!

Mr. Toads Wild Rye. Now that's a beer name. Cold Water Brewery has a more traditional restaurant feel to its decor. Though it does feature some slick, hand-carved tap handles for their draft beer. Located in the Swiss Chalet Village in South Lake Tahoe, Cold Water cooks up contemporary pub fare to match their delicious, but straightforward beer styles. Plus, and you can't make this up, they're next to a place called Buttermuffin, and no, it's not a breakfast joint, it's a smoke shop.

Sidells has a great vibe, with cafeteria bench style seating, growler-lined shelves, and festive string lights indoors. Outside presents an awesome little enclosed garden with picnic tables for enjoying your beer outside. Highlights include a cool Lake Tahoe-shaped tasting paddle, roped-off fermenting barrels off to the side of the Biergarten benches, and ballpark nachos topped with pulled pork and beer cheese. Of all the Tahoe breweries, Sidellis is one of the closest to the lake. As for the beer, no need to get crazy, opt for the Clockwork White.

Burgers, bacon, beers ... the necessary 3 B's of any good brewpub. The Brewery at Lake Tahoe offers customers beer tasting flights, an outdoor patio, and a sturdy food menu that focuses on locally farmed/source ingredients. It's a great place to grab a pint while you wait for your board to get waxed at The Village next door. Opened in 1992, The Brewery has exhibited serious staying power in the area. Fun fact, it was South Lake Tahoe's first licensed brewery.

Stateline Brewery has it all, a full-service menu, craft brews, live music, an outdoor beer garden, an indoor dance floor, bourbon, charcuterie boards, you name it. They will even roll out a big screen on the wall for the Super Bowl. Open every day from Noon to 8pm, Stateline Brewery is kid friendly and wheelchair accessible. As for the actual California/Nevada state line, it's a football field and a half away from the front door.

If an awesome beer garden with sweet stringy lights, a fire pit, and an airstream is your thing, then you've met your match with South of North Brewing. Their brewery swag and merch looks straight out of Huckberry, but we suppose that's par for the course out West. In a twist of good humor, if Stateline Brewing is a football field and a half from the Cali/Nevada stateline, then South of North Brewing Company is on the 1 yard line of the Nevada endzone. You could probably toss a keg from the beer garden and clear it. Not that we advocate for such things.

As for South of North's beer, they feature Bourbon Barrel-Aged Stouts, like El Padrino, straight up IPAs, like The Motorcycle Mama, and the Explorer Cream Ale.

The Mellow Fellow Gastropubs serve over 40 beers on tap, many of which are local Tahoe beer. One thing we appreciate about the pubs is that they make it easy for Lake Tahoe Brewery owners to contact them simply by being upfront on their website. We respect that.

* Update, Mellow Fellow (Truckee) is now The Hoppy Duck. We assume it's run with the same care and attention as it was under the Mellow Fellow name, given that its new owner worked there from its inception in 2013.

The Hangar is Tahoe's largest outdoor beer garden. They are dog friendly and kid friendly, but take great care if you bring either, as it's a taproom-first establishment, with a generous approach toward allowing your pup, Rex, and Arlo, Silas, Thackery, or whatever it is people are naming their children these days, to accompany you.

The X in AleWorX's logo lets you know that X marks the spot for good pizza and craft beer. Though technically not a brewery, we'll include it because AleWorX Stateline features their own brew, Cali Common, brewed by Alibi Ale Works, along with a pour-your-own-beer wall. Plus, they have a ski shot.

Cheesy? Maybe. Fun? Of course. Pretty much all ski town bars and brewpubs have a ski shot, including Park City.

Maybe the X is a Front-side Mute Grab? Anyway, AleWorX Stateline features craft cocktails, late night DJs, and the self-proclaimed "best wood-fired pizza". Salads, small bites, and sandwiches round out the food menu. If you're feeling heroic, the Das Boot is an 80oz pour. Do it, to it!

Cold Water Brewing, Sidellis, South Lake, and South of North participate in Sample the Sierra, an annual event pairing artisans and craftspeople of all trades. The main event is a cooking showdown amongst three local chefs called the Sierra Chefs Challenge. Other daily events include live music, art exhibits, farm tours, and more.

The Tahoe Brewfest will take place on June 5th, 2021 at Heavenly's Cal Lodge. Unlimited sample pours, live music, gorgeous views, what's not to love about the beer festival? Many of the local North and South Shore microbreweries and brewpubs will be in attendance.

On the way out of town toward Sacramento is the El Dorado Ale Trail. It passes straight through Placerville on it's way. These breweries lie on the Western Slope of the Sierra Nevada Mountains and possess their own charm.

If you're going to take a tour of the lake to enjoy craft beer, remember to be safe and responsible, first and foremost. Second, pack some snacks, it's going to be a long trip. And third, have a blast. It's a great area of the United States when it comes to the quality of the craft beer.